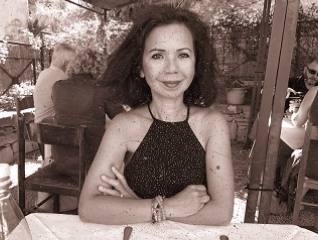 ND.-Elle is an abstract visual artist who lives in Paris, France. Her work is an emotional reflection of her internal and external environment.

At the crossroads of Europe and Asia by her origins, her personality was imbued with cultural diversity and shaped by other professional influences. After practising law as in-house lawyer in an international blue-chip company, she got a four-year degree as art historian at the famous Ecole du Louvre in Paris. She worked as trainee auctioneer in Parisian auction offices and sales. Along all these years she started doing painting and has never ceased to improve her fine art style with painters from England, Wales, California, France and Germany (Peter Casagrande) and ateliers de Beaux Arts de la ville de Paris. Overnight a clear insight came to her as an evidence : flourish and focus on painting !

Her work is mainly influenced by Abstract Expressionnism and Neo-expressionism. Hypersensitive to color she works on her own, guided by Francis Bacon’s insight : ‘’My instinct has produced forms, but this is nothing to do with inspiration…It happens unexpectedly and, at the same time, it appears obvious.’’ Each painting is an adventure, a tension between my inner self and the outside world, doubt and certainty, happenstance and building phase.